Photo by Charles A. Miller 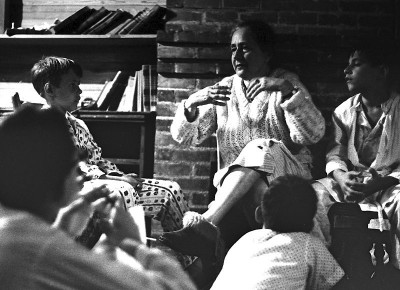 There are places along the Blue Ridge Parkway that hold a special meaning for each of us. For Charles A. Miller, Camp Catawba is that place. As a former camper and counselor, Miller is also the author of A Catawba Assembly, which explores his experiences there. Camp Catawba was an exceptional place for boys that operated for 26 years near Blowing Rock, North Carolina. Bounded by the Blue Ridge Parkway on one side and the Moses H. Cone Memorial Park on the other, the Parkway now owns the grounds of the camp. Here Miller shares a bit of his history with the camp and the influence of its founder and director Vera Lachmann.

The Story of Camp Catawba

By Charles A. Miller

Camp Catawba was founded near Blowing Rock in 1944 by Vera Lachmann, who had reached the United States as a refugee from Nazi Germany in 1939.

Vera was trained in Berlin, and her studies of classics of ancient Greece and Rome combined with the classic experiences of summer in the mountains.

The boys, mainly from New York and Washington, D.C., went hiking and horseback riding throughout the Moses H. Cone Memorial Park–then known as the Cone Estate. At camp, they sang Bach in the choir and performed plays by Shakespeare and Molière, by Strindberg and Aristophanes. Vera told the campers The Iliad and The Odyssey in alternating summers.

Some of them rode in the Blowing Rock horse show. The last hike of the season was always to Grandfather Mountain.

At Catawba, they made friends with the farm family of Mr. and Mrs. Ira W. Bolick, who lived just down the hill from the camp grounds. Mr. Bolick mowed the camp’s field with a team of horses. Mrs. Bolick helped stack it on a pick-up truck. At the farm, some of the boys got to watch her milk cows and churn butter.

Catawba became racially integrated in 1964, which Vera had devotedly wished for from the beginning. The road to integration was smoothed by the efforts of the minister at the Episcopal church in Blowing Rock.

They went to a campfire every Saturday evening. There they performed skits and heard Vera tell Greek myths. The boys went swimming in a cold spring-fed pond. They built huts in the camp’s woods.  (Catawba owned 20 acres of fields and woods.) They learned about white pine and Eastern hemlock, red maple and tulip poplar, white oak and red oak, and how to tell the laurel from the two rhododendrons, rosebay and Catawba.

Vera closed Camp Catawba after the 1970 season, having influenced the lives of more than 400 boys.

None of us have ever forgotten it.

In my case, the evidence is in the languages I studied in college and dozens of lifelong friendships.

Because Vera spoke German and knew Greek, these are the languages I studied at Swarthmore College. Vera had translated Sophocles’ play Philoktetes, which became “my” play and I’ve collected other translations ever since. She directed the campers in plays by Aristophanes. In Aristophanes’ Peace, I found lines that my wife and I asked the minister at our wedding to use as his text, rather than a passage from the Bible:

From the murmur and subtlety of suspicion

With which we vex one another,

And with some finer essence of forbearance

Among the friendships I forged at Catawba, the most moving was with a social worker named Kate Rosenheim from Berlin. At Catawba, Kate acted as nurse (until a doctor from Blowing Rock was needed). In Berlin, Kate had been responsible for the Kindertransport, the program to save Jewish children from the Nazis by arranging for their traveling to England. Kate’s efforts were praised by “her” children for the rest of their lives, and she and I corresponded for the rest of her life.

Another friendship, this one beginning in 1948, my first summer at Catawba, was with Eva Frankfurther, Vera’s niece who came from London to be the camp’s arts and crafts counselor; she returned in 1950.  In 1959, Eva committed suicide. I am currently preparing a booklet about Eva that contains poems Vera wrote in memoriam and out of grief, as well as a beautiful “Song for Eva on Thunder Hill” a poem written by a counselor in 1950. (Thunder Hill is a site along the Blue Ridge Parkway about two miles from Catawba.)

I am also in touch with Jane Bolick Rogers, the granddaughter of the camp’s neighbors.

Today, my favorite composer is Bach, as he was the favorite of the camp’s music director Tui St. George Tucker. Several of the campers, perhaps because of her influence, became composers, including one who wrote “Catawba Symphony.”

Vera directed several plays by Shakespeare at camp, including Twelfth Night in 1960.  The first line of the play is “If music be the food of love, play on….”

The music of Camp Catawba continues to play on for me.

Charles "Chuck" Miller passed away on March 22, 2019. Throughout his life, he was dedicated to maintaining recognition for Camp Catawba celebrated in his book, A Catawba Assembly.

View our video about Camp Catawba

As part of our 25th anniversary celebrations, the Foundation honored seven special members of its community of stewards at a ceremony on Saturday, June 18, at the Blue Ridge Music Center.

We are please to welcome new member to our Board of Trustees and additions to our Council of Advisors.
Visit the Blog

With his effortless vocals, distinctive songwriting, and instrumental prowess, Mike Mitchell continues to capture audiences and carve out his own place in bluegrass.
Jul

Bill and the Belles at Blue Ridge Music Center

Bill and the Belles began as a project to explore the sounds between rural and urban music, between vaudeville and down-home roots, but they’ve arrived somewhere wholly their own.
Jul

While Rissi Palmer made her mark in country music, she is equally at home in R&B, bringing the entire spectrum of popular music to bear on music she calls “Southern Soul.” She released her self-titled debut
Jul

Originally from Florida, now making her home in the mountains of Virginia, Amanda Cook acquired a love of bluegrass from her father, who played banjo throughout her childhood.
See All Events