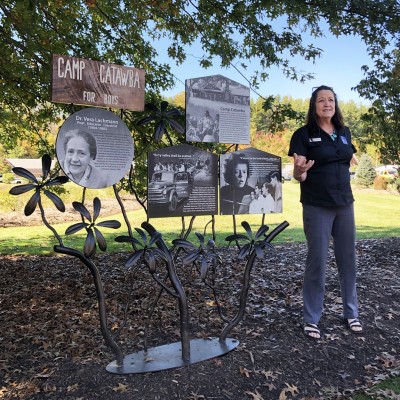 On October 15, the Blue Ridge Parkway Foundation and Blue Ridge Conservancy unveiled a display sign along the Middle Fork Greenway in Blowing Rock, N.C., to commemorate Camp Catawba and the work of the camp’s director Dr. Vera Lachmann, a Jewish refugee of Nazi Germany. The sign also features information about music director Tui St. George Tucker. In addition to the typical outdoor activities, the summer camp for boys was known for its cultural programs. The campers acted in plays, played in an orchestra, and sang in a choir.

﻿We’re honored to bring the stories of Dr. Lachmann and young campers to a larger audience through this project. We hope you’ll stop by the trailhead of the Middle Fork Greenway in front of the Tanger Outlets to learn more about the camp, which became part of the Parkway in 1985.