Celebrating 20 years of your commitment to the Blue Ridge Parkway 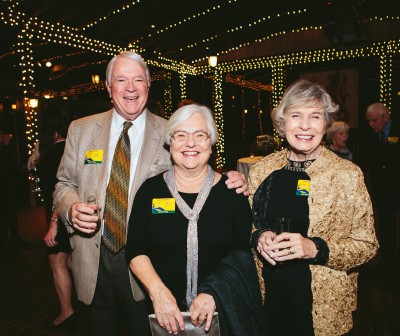 Last week, we were so happy to welcome guests to celebrate 20 years of protecting the Blue Ridge Parkway and honor just a few of the extraordinary people who make up our Community of Stewards during a lovely evening at Lioncrest at Biltmore.

We had such a wonderful evening with so many incredible supporters and stewards of the Parkway. The Foundation so grateful for our community and the amazing partnerships that make our work possible. Throughout the evening, we heard so many personal stories of amazing Parkway memories. This ribbon of road touches the hearts of so many, and the Foundation is committed to continually improving the journey for generations to come.

Guests enjoyed a cocktail hour on the porch, a chance to win an exclusive Biltmore Estate package, and a photo booth with a backdrop of a sunset view at Devil’s Courthouse on the Parkway. After the cocktail hour, guests were ushered upstairs into the ballroom for a wine-paired, three-course dinner and program including remarks from Foundation CEO Carolyn Ward and Chase Pickering, great-great-grandson of George W. Vanderbilt, who spoke about the importance of the Parkway and the role everyone can play in its future.  J.D. Lee, Acting Superintendent of the Blue Ridge Parkway, and Chris Abbett, Associate Regional Director for Partnerships with the National Park Service, also addressed the crowd.

During the evening, the Foundation recognized seven individuals, groups and companies with awards for being champions of the Foundation’s mission to preserve and protect the Blue Ridge Parkway. The evening concluded with a special musical performance by National Heritage Award recipient and luthier Wayne C. Henderson and Helen White, founder of the Junior Appalachian Musicians program.

In honor of the Foundation's past work to save hemlock trees on the Blue Ridge Parkway. Each guest received a hemlock seedling to plant in their yard as a thank you for taking part in the celebration. In 2015, more than 2,500 trees were treated on the Parkway in North Carolina in collaboration with the Hemlock Restoration Initiative.

Extraordinary members of our Community of Stewards who champion our mission to protect and preserve the Blue Ridge Parkway were also honored. Whether individuals, groups, or companies, their contributions ensure the future of the scenic route. They have our heartfelt thanks and appreciation.

Here are the recipients:

This honor recognizes exemplary individual service in advancement of the Foundation, and is named for its first recipient, Pat Shore Clark, a board member, major donor, and volunteer.

Billie Brandon Howell has been a member of our Community of Stewards since the early days of the Foundation and was one of its first volunteers. She infuses enthusiasm and skill into every aspect of her contributions to our mission. Howell is particularly dedicated to the preservation of Moses H. Cone Memorial Park, serving on the steering and Denim Ball committees since 2015. She also serves on the Foundation’s Council of Advisors. She is recognized in the High Country of North Carolina and beyond for her contributions to numerous philanthropic endeavors and enjoys involving others in protecting the Blue Ridge Parkway.

This honor recognizes exemplary support of the Foundation by a community group or organization.

Eurosport Asheville and the Asheville BMW Riders motorcycle club have hosted the High Pass Boogie ride in support of the Parkway annually for four years, raising funds and introducing scores of new people to the Foundation’s mission. The local business and group have raised and secured matching funds for more than $65,000 worth of projects at Graveyard Fields, Mount Pisgah, Moses H. Cone Memorial Park, and Craggy Gardens.

This honor recognizes a business that embodies the spirit of community and commitment to the Blue Ridge Parkway.

Indera Mills’ generosity to the Foundation and Parkway is expressed through its sponsorship and partnership in support of the Roots of American Music summer concert series at the Blue Ridge Music Center and the Sounds of the Mountains winter series at the Yadkin Cultural Arts Center in Yadkinville, North Carolina. Indera Mills has sponsored the summer concert programs each year since 2015. The Sounds of the Mountains concert series will present its third season in early 2018. Through these programs, Indera Mills and its owner, John Willingham, are spreading a recognition of the important role traditional music plays in our history and daily lives.

This honor recognizes a community or family foundation that makes significant investments in projects and programs to benefit the Blue Ridge Parkway.

The Anonymous Trust has provided $600,000 in critical support during the past three years to undertake restoration projects at Moses H. Cone Memorial Park and visitor facility enhancements at Julian Price Memorial Park.

This honor recognizes artistic contributions that advance the future of the Blue Ridge Parkway and Foundation.

For Roanoke artist Eric Fitzpatrick, the Blue Ridge Parkway has been a source of inspiration since he first picked up a paintbrush. This year, he donated lithographs of his piece, The Blue Ridge Parkway, to launch our Renew the Views program. Each donor who gave $100 or more to help clear vistas obscured by overgrown vegetation received the work. Fitzpatrick’s lithograph inspired hundreds of individual contributions to overlook restoration, which is slated to begin next spring. (Support the program and receive a lithograph.)

Wayne Henderson and Helen White exemplify and highlight the musical traditions showcased at the Blue Ridge Music Center. Henderson is one of the nation’s foremost finger-picking guitarists and a world-renowned luthier. His legendary contributions include spreading an appreciation for and understanding of Blue Ridge Mountain music, mentoring young aspiring Appalachian musicians, and supporting venues and festivals that highlight mountain music. Since its establishment in 1995, the annual Wayne Henderson Festival at Grayson Highlands State Park in Virginia has helped fund scholarships to assist young, local, traditional musicians in their pursuits of musical exploration and education.

In 2000, White founded the Junior Appalachian Musicians program, known as JAM, and for more than a decade she led the Alleghany County (N.C.) chapter while helping to develop the model and curriculum for the broader program, including involving noted old-time and bluegrass musicians to share their knowledge and techniques with children. Today, there are more than 40 communities in the Southeast with active JAM programs engaging 1,500 youth participants.

This honor recognizes those who spur innovative ideas that advance the mission of the Foundation.

Ten years ago, Dr. Olson Huff envisioned a way to address growing concerns about the health of children and our natural environment. In his career as a pediatrician, he witnessed the harmful effects of children’s increasingly sedentary lifestyles coupled with their growing disconnection from the outdoors. He outlined a plan to get children unplugged from electronic devices and outside to enjoy nature. Huff’s innovative idea became the Kids in Parks (KIP) program, and garnered the support of the Blue Ridge Parkway Foundation, Blue Cross and Blue Shield of North Carolina Foundation, and the National Park Service. Today, KIP encourages families to explore TRACK Trails on the Parkway and across the country. In addition to boosting the health and well-being of thousands of children nationwide, the program is inspiring the next generation of stewards, who will care for all public lands, including the Parkway.

A special thanks goes out to Biltmore, the presenting sponsor of the evening.

Much appreciation to Rachael McIntosh Photography (all photos except where noted)

Give in honor of the 20th