Of Valley and Ridge student.jpg 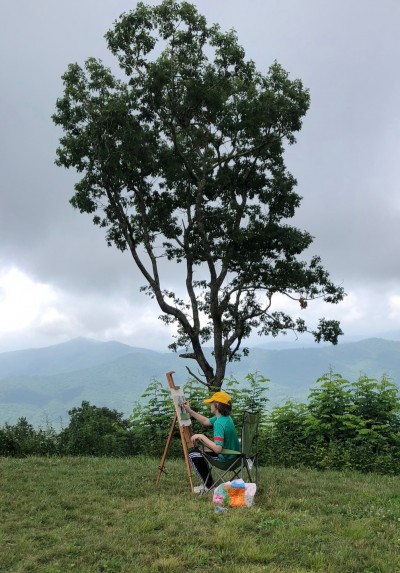 A young artist paints on the Blue Ridge Parkway
September 27, 2019

For the second year in a row, the Saints of Paint are preparing pieces for their annual fundraiser to benefit the Blue Ridge Parkway Foundation, Of Valley & Ridge: A Scenic Journey through the Blue Ridge Parkway. The event kicks off with a preview party from 5 to 8 p.m., Friday, October 11, (get tickets) and continues through the weekend. Best known for creating pieces inspired by our mountain scenery, the Saints of Paint sell their work to raise money for groups who are dedicated to preserving the environment, caring for animals, and working for positive social change. This time of year, then, finds their projects well underway as they explore the outdoors, easels among trees, developing en plein air paintings for the show.

However, there is another group that plays an essential role in Of Valley & Ridge.Young artists ages 13 to 16, taught by Saints of Paint member Alisa Lumbreras, will also have pieces available for purchase at the show. To prepare, Lumbreras took four students, Audrey, Cameron, Erisa, and Rohan, on a camping trip at the Mount Pisgah campground on the Parkway this summer. There, they could practice plein air painting while genuinely connected to their environment—a feeling that the students view as imperative to their creative process.

The students explained that this connection, and getting “in the zone,” was an invigorating moment while they are painting. It is the time when they are fully present with the landscape and their piece; where every brush stroke reflects what they are seeing, and they are no longer thinking, just flowing along the canvas to recreate the magnificent scenery. This ability to exist in the moment is a skill the students agreed has transferred into their daily lives. Thirteen-year-old Cameron said painting has helped him in sports, making him “better at adapting to the here and now and zoning into what is happening around him.”

Young artist Rohan stated that without drawing or painting, one might miss out on seeing so many fascinating things in nature, such as colors in the clouds, how uniquely a tree grew, or the particular flowing of branches in the wind.

“Every part of the experience can be reflected in the painting,” Erisa said, “even the bugs biting or the sounds of water in a nearby stream. All of these influence your emotions, which are then revealed in the painting.”

Rohan hopes to evoke emotions in his audience, so that they can do more than just see a beautiful image. In his mind, the best paintings earn their recognition because one can “feel the emotion [the painter] had in it, and how they were influenced by it to paint their adaptation of reality.”

Being a plein air painter naturally requires adapting to the elements, and unfortunately for the painters, the weather didn’t always cooperate as they prepared for the show. The night before our meeting with the young artists, they had set up their easels at an overlook on the Parkway to prepare for a night of drizzly nocturnal painting. Despite the rain, the group painted until the wind began to topple their easles. Taking it in stride, they returned to camp, where they made a fire, played campfire games, and drew ink and pen illustrations of their surroundings them before heading back to their tents for the night. The next morning, as the rain continued, they went for a drive to capture photographs of their favorite Parkway views to paint in the studio during their class.

Before leaving the campsite, the young artists thanked their teacher for her support and empathy throughout the process. She has helped them grow and find their own passions within their artistic expression. They mentioned how helpful it was for them to learn one of Alisa’s favorite quotes: “you’re exactly where you’re supposed to be at that moment.” This quote is a constant reminder that they are always doing a perfect job, encouraging them to persist through their paintings even when the prospect seems daunting and overwhelming. The students’ work will be available for purchase at the annual Of Valley & Ridge art fundraiser organized to support the Blue Ridge Parkway Foundation.

Clay Fleming completed an internship with the Blue Ridge Parkway Foundation in the summer of 2019. He is now a graduate student in Public Policy at the University of North Carolina-Chapel Hill.

Special thanks to BlackBird Frame and Art, which is sponsoring tickets for parents to attend the preview party.

Learn more about the show