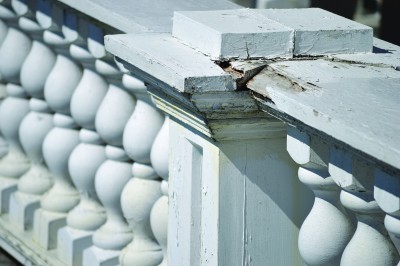 Textile magnate Moses H. Cone would never have allowed a leaky roof to go unattended at his beloved Flat Top Manor. Now it won’t. Work will begin on Monday, April 10, to replace the flat roof on the home thanks to your support!

The flat roof is failing and has resulted in water damage to the porch ceiling, columns, and interior of the manor. The process includes removing the existing roofing system, constructing and replacing the damaged gutter system, and installing a new flat roof and historically and architecturally accurate balustrades. Once complete, the new roof will prevent further damage as the we continue to make repairs to the 23-room Colonial Revival style home completed in 1901.

Visitors to the Manor House are asked to not cross the safety fencing, use designated walkways to enter the manor, and avoid distracting the construction team.

This project is part of our multiyear plan to repair and rehabilitate many features of the historical estate. Together, we have raised $1.7 million toward our total goal of $3 million. Future projects include:

The project will cost approximately $200,000 and will be funded thanks to support from you and grants from the Covington Foundation and Cannon Foundation.

We are thrilled to announce that the long-awaited transformation is underway at Flat Top Manor on the Blue Ridge Parkway. Last week, crews began repairs to the weathered exterior of the circa-1901 Colonial Revival home, the centerpiece of the 3,500-acre estate that is now Moses H.

With Flat Top Manor as the backdrop, the fourth annual Denim Ball welcomed more than 200 guests on Thursday, August 22. It was the first time the Blue Ridge Parkway Foundation hosted the event at Moses H. Cone Memorial Park.

The rehabilitation effort at Moses H. Cone Memorial Park is in for a big boost.
Visit the Blog

National TRACK Trails Day is a time to celebrate kids getting outdoors with our designated Kids in Parks trails. Whether you hike, bike, paddle, or play disc golf with us, it’s a day to enjoy Kids in Parks locations along the Blue Ridge Parkway and across the country.
Aug

The Steel Wheels have long been at home in the creative space between tradition and innovation, informed by the familiar sounds of the Virginia mountains where the band was formed, but always moving forward with their rootsy brand of Americana.
See All Events