Repairs to exterior of the historical mansion will continue into 2021. 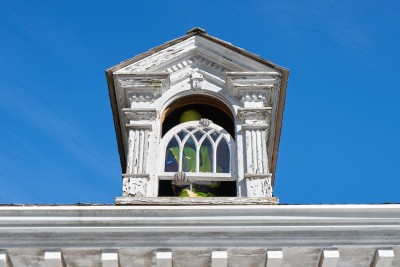 A worker with removes a dormer window at Flat Top Manor for repairs.
December 10, 2020

We are thrilled to announce that the long-awaited transformation is underway at Flat Top Manor on the Blue Ridge Parkway. Last week, crews began repairs to the weathered exterior of the circa-1901 Colonial Revival home, the centerpiece of the 3,500-acre estate that is now Moses H. Cone Memorial Park.

The initial steps included the removal of windows, porch columns, railings, and balusters. These elements of the house will be sent to a preservation workshop in Greensboro, N.C., where they will be evaluated and, when possible, repaired to their original condition. The extensive renovations will continue during the spring and summer of 2021 to fix or replace deteriorating wood siding, shingles, doors, the porch ceiling, gutters, and additional features.

The rehabilitation is being made possible through your donations to the Blue Ridge Parkway Foundation and funding from the National Park Service.

“We are so appreciative of the support from the Blue Ridge Parkway Foundation and its community of stewards,” said Neal Labrie, Acting Superintendent of the Blue Ridge Parkway. “The Cone Memorial Park, and in particular the manor, have become synonymous with the Parkway experience in the North Carolina High Country. We are pleased to be rehabilitating this well-loved location so that future generations of park visitors can learn about the Cones’ story and enjoy all the estate has to offer.”

The project is one of many donor gifts has funded at the estate over the years, including the construction of restrooms at Bass Lake, clearing of vegetation on carriage trails, and the installation of a fire suppression system in the manor.

“Donor support for the restoration of Flat Top Manor has been tremendous,” said Carolyn Ward, CEO of the Blue Ridge Parkway Foundation. “Those who love this magnificent manor truly came to its rescue, and we couldn’t be more grateful.”

The cost of the exterior renovation is $2,362,198. Ritz Construction, Inc., holds the contract for the project and is working in collaboration with the Denver Service Center, the National Park Service’s planning, design, and construction management office. The center tackles the park system’s largest projects, including preservation of Mount Rushmore, the Statue of Liberty, and the Wright Brothers Memorial.

Since the creation of the country estate by Moses and Bertha Cone in the late 1800s, it has been a landmark of the Blowing Rock community. From its very early days, the public was allowed to explore the carriage trails and enjoy the grounds.

“Thousands of visitors to the Blowing Rock area make the Blue Ridge Parkway and Cone Estate a must-see destination during their stay,” said Tracy Brown, Executive Director of the Blowing Rock Tourism Development Authority. “To our local economy, it's incredibly important to protect and preserve these public assets."

During construction, visitors to Flat Top Manor will have the opportunity to observe the restoration work from a safe distance outside a fenced area. The Parkway Craft Center and America’s National Park bookstore that operate inside the manor closed for the season on November 30. Both operations are slated to reopen next spring.

Watch our 30-minute webinar, What’s Next at Flat Top Manor?, to see photos and learn more about the path ahead.

The park was owned and developed as a country estate by Moses H. Cone, a textile magnate of the late 19th and early 20th centuries. Cone was also an inquisitive gentleman farmer who experimented with agriculture. Beginning in 1897, he carefully created a beautiful estate featuring lakes, orchards, fields, and forests, and carriage trails.

Before his untimely death in 1908, he constructed Flat Top Manor as the centerpiece of this idyllic mountain retreat. For 40 years after his passing, his wife, Bertha, operated the estate adhering to his original concept. After her death, the 3,500-acre estate became part of the Blue Ridge Parkway in 1950. The estate is listed on the National Register of Historic Places.