Remembering the People and History of Rock Castle Gorge 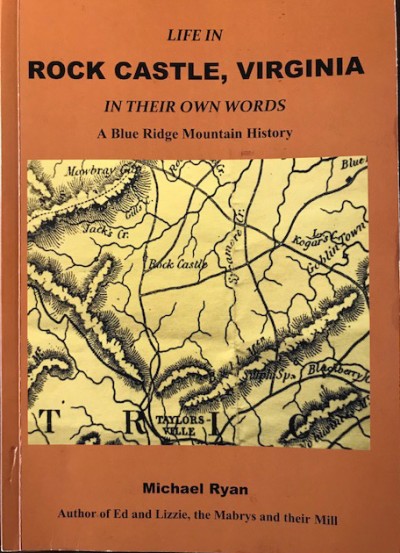 Life in Rock Castle, Virginia In Their Own Words: A Blue Ridge Mountain History
April 2, 2018

Not long after public historian Mike Ryan became an interpretative ranger for the Blue Ridge Parkway in its Plateau District headquartered near Rocky Knob, he was asked if he might develop a program about Rock Castle Gorge a few miles south of the knob. Ryan had hiked the gorge a number of times, had seen the ruins of long-collapsed cabins there and knew that once upon a time, the gorge must have been a growing community of families who somehow coaxed a living from the steep hillside and rocky soil.

It wasn’t long before Ryan was leading popular walking tours on Saturdays down into the gorge, starting near the old Rocky Knob Housekeeping Cabins all the way down and past the site of a Depression-era Civil Conservation Corps camp. During part of this time, Ryan was also researching and writing a book that became Ed and Lizzie, the Mabrys and Their Mill, about the couple that had built and run the ingenious Mabry Mill a few miles south of Rocky Knob on the Blue Ridge Parkway.

If you’ve read that book, you already know a few things about Ryan: He’s a careful researcher with a nose for finding a good story and fleshing it out. He’s dedicated to the idea that history has a lot to tell us about how we got where we are. And he has a knack for bringing back to life on the printed page the sturdy and often colorful folks who lived and worked in these hills and valleys long before Franklin D. Roosevelt launched work on the 469-mile Blue Ridge Parkway.

Now Ryan has produced his second book about key people and parts of this region in Life in Rock Castle, Virginia In Their Own Words: A Blue Ridge Mountain History. The book is available in such local shops as the Floyd Country Store and at Poor Farmers Market in Meadows of Dan, and no doubt will be available in other places along the Parkway when it opens later this spring.

Those who haven’t hiked down the gorge on Rock Castle Road may be surprised to learn how many families lived here in the 18th and 19th centuries and well into the 20th—and in fact at least one family still has a privately owned home there and spends much of the warmer months on the banks of Rock Castle Creek. But Native Americans, including the Cherokee, lived and hunted in the gorge, which includes parts of what is now known as Floyd and Patrick counties, for thousands of years prior to the arrival of settlers in the 18th century.

What those settlers found in the gorge was a virgin forest of huge hardwood trees, a fast-moving mountain stream that one day would be recognized as one of the best trout streams in the region and fertile soil that would support the growth of apple trees and corn, among other things.  Wildlife was plentiful for years, and though the weather could be harsh, the gorge had charms that drew residents: beautiful scenery, clear waters and stunning geological features such as the Bare Rocks, a tumble of huge boulders and outcroppings that formed caves and sometimes appeared to be the ruins of an ancient fortress. Yet Ryan notes that the name “Rock Castle” came from the glistening, clear quartz crystals that reminded early settlers of the castle turrets they recalled from the European landscapes of their families’ origins.

There is a widely held stereotype of Rock Castle residents, unschooled and uncultured, living in hardscrabble poverty in a remote area, cut off from the world around it.  One colorful story told of a man whose property was so steep that when he fell while hoeing in his corn patch, he rolled all the way down to his front door before he stopped.

But Ryan’s research gives readers a different view of the sturdy mountaineers and their lives. As the population of the gorge grew to 200 or more spread among 30 families along the six-mile Rock Castle Creek, there would be two stores to purchase food staples or clothes, three mills along the creek, nearby churches to attend, a schoolhouse, even a distillery prior to Prohibition. And while widespread electric service was not available, growing numbers of residents owned battery-powered radios and one resident put in a waterwheel-powered Delco-Light generating plant to provide light and a way to recharge radio batteries.

And one year a marvelous thing happened: The circus came to Rock Castle Gorge. Evidently the circus was taking a shortcut over the difficult terrain and chose to travel down Rock Castle Road, which tracked Rock Castle Creek. The sight of three elephants and a host of circus performers captured the attention of mountain families, and the circus put on a show for the denizens of Rock Castle.

There are other colorful stories—including that of Reed Belcher, who served in both the Confederate and the Union armies during the Civil War; the abandoned “moonshine car” that broke down while running illicit whiskey up the mountain and still rusts near the spot it last ran—and the beautiful stonework in ghostly fireplace chimneys that still stand, marking the graves of the homes where the people of Rock Castle once lived.

Jack Betts is a retired journalist and former chairman of the Board of Trustees of the Blue Ridge Parkway Foundation.