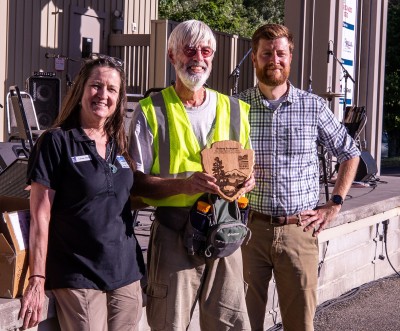 As part of our 25th anniversary celebrations, the Foundation honored seven special members of its community of stewards at a ceremony on Saturday, June 18, at the Blue Ridge Music Center.

“Our 25th anniversary is really a celebration of the people who bring our mission to life through their contributions to the national park they love,” said Carolyn Ward, CEO of the Foundation. “We are fortunate to count these honorees as members of our community of stewards.”

Ian Jordan was honored with the Youth Ambassador award for his contributions to Kids in Parks, a program of the Foundation. Over the past five years, Jordan has visited more than 80 of the program’s TRACK Trail locations, and logged more than 100 miles hiking. He has become a Junior Ranger in 118 national parks and in every North Carolina State Park. He also helped Kids in Parks design, test, and implement a new smartphone-based Junior Ranger activity, creating an opportunity for children across the country to learn about the natural, historical, and cultural resources found in national parks.

W.L.A. Trucking earned the Corporate Champion Award for the company’s support of the Blue Ridge Music Center. The Mount Airy, N.C.,-based business owned by Bobby and Debbie Post has sponsored the summer concert series since 2018, and contributes to special critical projects, including the replacement of aging speakers and other equipment in the amphitheater. Bobby accepted the award on behalf of the company.

Radio station 88.5 WFDD received the Media Partner Award for its work to spread the word about the venue’s musical programs throughout its 32-county listening area, including northwest North Carolina and southwest Virginia. The partnership has furthered the Music Center’s mission to celebrate the music and musicians of the mountains. Morning Edition host Neal Charnoff accepted the award.

The National Council for the Traditional Arts was recognized with the Visionary Award for the organization’s work to establish the Music Center, founding the annual concert series that continues today, and opening the Roots of American Music exhibit in 2011.

First Citizens Bank is the premier sponsor of the Foundation’s 25th anniversary celebrations.