A New Day For Parks.jpg 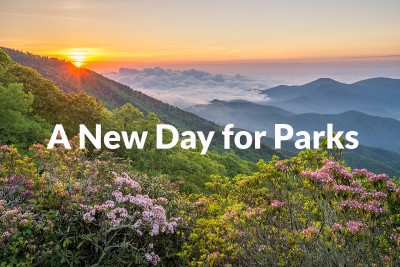 The Great American Outdoors Act is now official! With the stroke of a pen, years of hard work by thousands across the country became the law of the land, securing a much brighter future for our public lands and parks. There have been few times in a generation that the word legacy can be used in reference to the future of our public lands, but that time is now.

The Great American Outdoors Act helps fulfill the promise made more than 100 years ago in the Organic Act of 1916 used to establish the National Park Service. The new agency’s mission was clear, “to conserve the scenery and the natural and historic objects and the wild life therein and to provide for the enjoyment of the same in such manner and by such means as will leave them unimpaired for the enjoyment of future generations.”

Anyone who has traveled the Parkway lately knows that the reality has been a chronically underfunded park, resulting in more than $508 million in backlog repair needs. The list includes crumbling roads, bridges, and other critical infrastructure with the majority needed to repair the motor road itself. The Parkway is clearly “impaired” and projects continue to mount each year.

With the passage and signing of the Great American Outdoors Act, many of these critical infrastructure projects can begin to be addressed. This will allow the Blue Ridge Parkway Foundation to focus on raising funds for programs and projects that enhance the experiences on the Parkway, such as preserving and presenting mountain music at the Blue Ridge Music Center, introducing children to the joys of the Parkway through our Kids in Parks program, repairing damaged trails, restoring viewsheds, improving picnic areas and campgrounds, and restoring educational programming often missing from key historical and recreational areas.

Over the past 22 years, the Foundation has provided more than $16 million in funding and support for the Parkway, creating positive impacts for millions of people each year. Through your continued support, we look forward to achieving much more together.