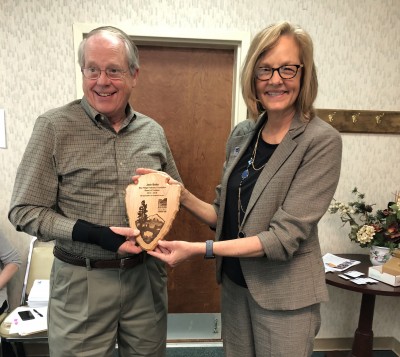 Jack Betts is honored for his role as the Chair of the Board of Trustees
April 14, 2018

We are pleased to announce the election of six new members and a new slate of officers to serve on our board of trustees.

At the Foundation’s board meeting in November 2017, Cynthia Evans Tessien of Winston-Salem, North Carolina, was elected chair of the board of trustees, taking over for Jack Betts. Betts will continue to serve on the board as past chair. Alfred G. Adams, also of Winston-Salem, was appointed vice chair, while Rebecca Reeve (Asheville, N.C.) and Craig Lancaster (Fletcher, N.C.) were appointed as secretary and treasurer, respectively.

With diverse backgrounds, these individuals bring a wealth of experience and expertise to help guide the organization into the future.