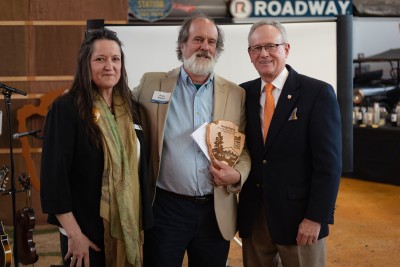 We were thrilled to honor special members of our community of stewards during a 25th anniversary reception on April 7 at the Virginia Museum of Transportation in Roanoke, Va..

Conservationist and retired attorney Broaddus Fitzpatrick was awarded the Pat Shore Clark Stewardship Award for exemplary individual service in the advancement of the Foundation.

“Broaddus has been a dedicated leader for the Foundation for more than 10 years. From his role as Chair of the Board of Trustees to his continued service helping introduce our new specialty license plate in the Commonwealth, his leadership has been a guiding light for our work for the Blue Ridge Parkway,” said Carolyn Ward, CEO of the Foundation.

George Kegley, a journalist, volunteer, philanthropist, and champion of preservation, was honored posthumously with the Legacy Service Award. His son, Andy Kegley, accepted the award on behalf of the Kegley family. In his speech, Andy fondly recalled drives along the Blue Ridge Parkway with his father and siblings. In addition to his work to protect the national park, George was known for championing land conservation and historic preservation as well as helping refugees, and driving for the Meals on Wheels program.

“All of us who had the good fortune to know and work with George Kegley realize we will never meet a finer man,” said Fitzpatrick, who served on the Foundation’s board with Kegley.

General Manager Jean Hoell accepted the Corporate Champion Award on behalf of Peaks of Otter Lodge operated by Delaware North at milepost 86 on the Blue Ridge Parkway. For years, the lodge has supported Parkway enhancements through the Parkway Partners check-in program. Guests are invited to donate $1 each night of their stay to support the Foundation’s work.

“The lodge doesn’t just run an amazing place, they give back,” Ward said. “They help make a positive difference in the experience for all the visitors.”

The Foundation’s upcoming projects in Virginia include support for a youth crew to complete trail repairs at Humpback Rocks, the revival of free mountain music presentations at Humpback Rocks, Peaks of Otter, and Mabry Mill,  and installation of new Kids in Parks TRACK Trails in the Roanoke area. The Foundation recently introduced the Blue Ridge Parkway license plate in Virginia to benefit the Parkway. More information at GetThePlate.org.

As special thanks to First Citizens Bank which supported the celebration as the premier sponsor along with event sponsor Visit Virginia’s Blue Ridge.