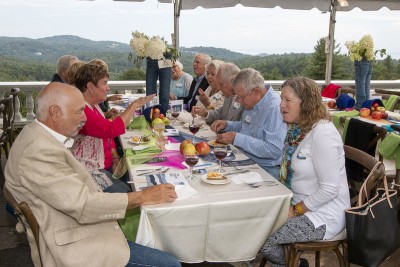 With Flat Top Manor as the backdrop, the fourth annual Denim Ball welcomed more than 200 guests on Thursday, August 22. It was the first time the Blue Ridge Parkway Foundation hosted the event at Moses H. Cone Memorial Park. Thanks to our guests, the sold-out event raised more than $200,000 to fund continued restoration efforts at the historic manor!

The evening was more than a fundraiser; it was truly a celebration of the community’s deep commitment to this estate listed on the National Register of Historic places.

Guests arrived for the evening by trolley cars and vehicles provided by Modern Automotive, and were invited to mingle on the lawn, enjoy hors d’oeuvres, and place bids in the silent auction tent.

Seated under a long white tent erected at the foot of the Colonial Revival-style mansion, guests enjoyed a buffet dinner by Gadabouts Catering and a spectacular view of Bass Lake and the Blue Ridge Mountains.

After the meal, auctioneer Jenny Miller energized the crowd with live bidding. The crowd was invited to raise their paddles to pay for features of the home that need to be replaced, including columns, windows, and balusters.

The night continued with dancing on the porch of Flat Top Manor to live music by Soul Benefactor. As dusk settled in, the 23 rooms of the mansion were set aglow for guests to admire.

Over the last three years, the Foundation has raised more than $3 million for extensive repairs to the manor house and grounds, with a total goal of $3.6 million. Due to the success of the Denim Ball, the Foundation has now closed the funding gap to $400,000 for Cone projects.

There is still time to donate to remake history at Moses H. Cone Memorial Park.

Special thanks to photographer Jan Todd for capturing the evening. To view additional photos and purchase prints, visit the Deep Creek Photography website.