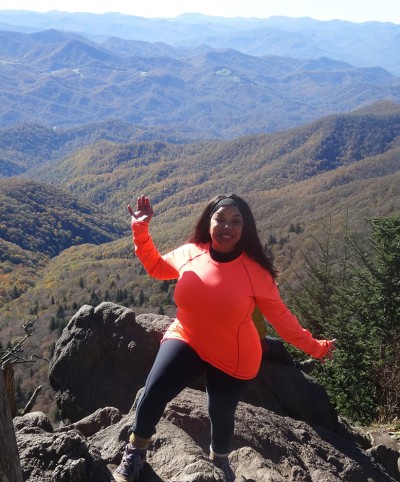 Tanya Marie Cummings atop a mountain peak along the Blue Ridge Parkway.
July 7, 2020

In our country, people of color suffer from certain chronic illnesses at a higher rate than the rest of the population. At the same time, they seldom use our public lands for the health benefits that can absolutely be achieved through regular exercise, which is a big reason Pathways to Parks was formed. We’re an outdoors group with a distinct mission to introduce more Black and Brown people to local and state parks and nature preserves. We believe this is the gateway to encouraging them to become interested in, and take ownership and care, of our national parks.

My fiancé, Pender, and I have been spreading the word about Pathways to Parks since its inception in March of 2018 when it started with five people. We view ourselves as two intrepid nature lovers with a passion for the outdoors. Whether we’re engaging in walking, hiking, fishing, whitewater rafting, tennis, picnicking, sightseeing, cycling or whatever, being outdoors shows us our connectedness not only to nature, but to our souls.

Flash back to one of my most memorable adventures—the hike at Waterrock Knob in the fall of 2018.  On each hike it’s important to always have a leader. Our leader is usually Pender, and somehow I always wind up being the sweep, the person taking up the rear of the group. It’s my short legs—of course! We can always expect Pender to put on a show of bravery since he’s the fittest of the group and the most adventurous.

On that particular hike, I was the only one who brought along hiking sticks. I wasn’t sure if everyone else was just trying to be cool or if I was the only one feeling a little intimidated by what lay ahead.  Keep in mind that it was late fall and nearing the time when sections of the Blue Ridge Parkway were about to close due to inclement weather. At the start of the climb, I saw lots of ice on these huge stone steps which seemed to lead to oblivion. I had second thoughts and wondered if I should turn back, but I kept that revelation to myself.  So yes, my sticks not only came in handy, they were my lifeline that pretty much saved me.  Thank goodness for hiking sticks!

There were times when nature reminded me of just how short my little legs were.  I was baffled at times, trying to figure out if I should place the sticks in front of me and pull myself up, or behind me and push up off of them. Silly me! While I was trying to manipulate my sticks, the others forged ahead. So, between running to catch up and catch my breath and hollering for the others to “wait up” while I avoided tree roots, I wasn’t sure if I made the right decision to be the sweep.

Alas, Pender to the rescue! As usual, Pender, my protector, would never leave me too far behind. My prince in hiking armor was always wandering back to ensure the well-being and safety of the last personme. I finally got used to the hiking sticks when Pender came up with the bright idea of relieving me of one to make it even easier for me to maneuver. My hero! We amused ourselves along the way and the others got a kick out of my bouts of self-deprecation. We hiked and laughed and took tons of pictures for memories. At the halfway point, we had lunch, which was the best part of all, because it gave us an opportunity to build comradery with one another. Those moments are priceless.

As we gathered our gear together and decided to head back, I soon realized that it seemed as if it had been easier going uphill than the trek down. My knees began to feel like my 65 years on this earth, or, was it my short legs? The rest of the group walked down and talked with ease. I was huffing and puffing, watching the ground for the proper placement of each foot Instead of talking to others in the group, I was talking to myself. My often repeated phrase was, “Oh my God!” It was hilarious as if I was playing a part in a comedy movie. What I remember the most was that I kept laughing at myself. Yes, I was that bad that it was funny.

When I made it to the parking lot, I remembered how excited I was to be on level ground and actually see road signs. It was proof that I made it back to civilization.  I survived.

I’m now 67 years of age and can hike like a pro (I think). To stay in shape, I speed walk up and down the Carl Sandburg Trail like it’s a practice run for the big times. The word is out about how much fun our group has, and now Pathways to Parks receives invitations from other groups to join them on their hikes. Although I have fears of heights, narrow ledges, and steep climbs, I’m no longer intimidated. I just do it! I can even identify some plants after learning from seasoned hikers.

The adventurous life of a hiker is something I wouldn’t trade for being glued to the TV all day or finding things to do at home. So grab your sticks and explore the countless trails of Western North Carolina with Pathways to Parks. If I can do it, anyone can do it!

Pathways to Parks anticipates that state parks, the National Park Service, and the conservation movement will be more inclusive and create respite and recreation opportunities for all people. Our national parks belong to all of us. Why not visit them?

Tanya Marie Cummings is the President of Pathways to Parks. She is also member of the Council of Advisors for the Blue Ridge Parkway Foundation. To learn more about Pathways to Parks, e-mail pathwaystoparks@yahoo.com.