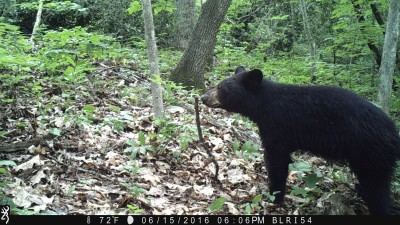 Remote cameras captured an image of a bear along the Blue Ridge Parkway.

FUNDED! We are happy to announce that this projects is fully funded.

Since the Foundation’s initial funding of remote wildlife cameras in 2009, the devices have captured more than 25,000 images of over 35 species of wildlife, including black bears, bobcats, coyotes, red and gray foxes, elk, European wild hogs, white-tail deer, and numerous other species on the Blue Ridge Parkway. The infrared cameras are a valuable tool for resource managers in their efforts to survey and oversee larger animals, especially predator species, on Parkway land.

In the years since, the program has grown to cover more remote areas of the Parkway and engage citizen scientists in the process. You can give citizen scientists the equipment they need to complete an important mission. This year, volunteers are hiking off the beaten paths and use GPS coordinates to place motion-sensitive cameras in remote areas, returning periodically to find out what types of birds, mammals, reptiles, and other creatures have passed by the lens. Their work will allow park biologists to cover more territory in a multiyear study of animal populations and their locations and habits. Please give today.

Holiday Gifts that Give Back

Need a great gift for a loved one? We’ve got perfect presents for people who love music, the outdoors, photography, puzzles, getaways, and more. The best part is that each gift also shows your love for the Blue Ridge Parkway. Happy holidays!

After 14 months of exterior renovations, Flat Top Manor, the centerpiece of Moses H. Cone Memorial Park on the Blue Ridge Parkway, once again gleams from its perch overlooking Bass Lake, thanks to you.