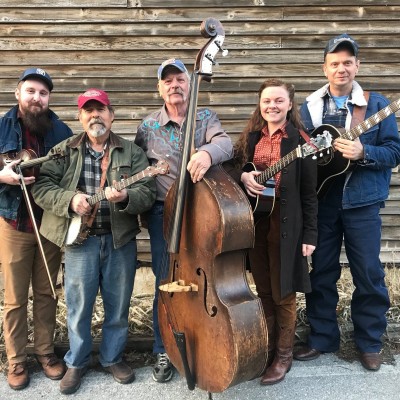 Rooted in tradition, fearlessly creative, and possessing a bold, dynamic sound, The Slocan Ramblers are Canada’s bluegrass band to watch. Named the 2020 IBMA Momentum Band of the Year, the band has become a leading light of today’s acoustic music scene. With a reputation for energetic live shows and  impeccable musicianship, the group has been winning over audiences from MerleFest to RockyGrass and everywhere in between.

The Slocan Ramblers showcase their unique blend of bluegrass, old-time, and folk with deep songwriting, lightning fast instrumentals, and sawdust-thick vocals on their album, Queen City Jubilee, a 2019 Juno Award Nominee for Traditional Roots Album of the Year. Tier latest album, Up the Hill and Through the Fog, was released June 10. The Slocan Ramblers are Frank Evans on banjo and vocals, Adrian Gross on mandolin, Darryl Poulsen on guitar and vocals.

Concerts are hosted in the outdoor amphitheater. Tickets are $20 for adults, children 12 and younger are admitted free. Food is available for purchase from Galax Smokehouse during the show.