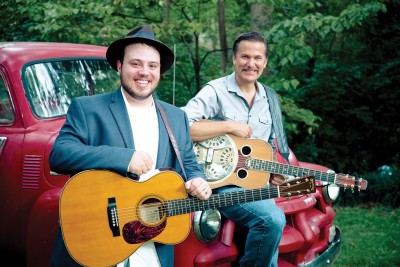 Join us for a concert with Rob Ickes and Trey Hensley at the indoor theater at the Blue Ridge Music Center. Based on a mutual love of bluegrass, country, blues, western swing, and other string band music of all kinds, the partnership of dobro player Rob Ickes and  guitarist Trey Hensley continues to delight audiences of traditional American music around the globe. The duo joined forces in 2015 when they released their first album, the Grammy nominated Before The Sun Goes Down. Since that time, they've performed in places as close to home as Nashville's world famous Station Inn, as far away as the Tonder Festival in Denmark, and at many prestigious U.S.  music festivals, including Rockygrass, Wintergrass, Bluegrass Underground, and the Freshgrass Festival.

Ickes and Hensley released their second album in 2016, The Country Blues, which testified to the growing diversity and expansion of their collaborative talents and repertoire. They have also collaborated with other musicians, taking part in the 2016 IBMA Recorded Event Of The Year, Fireball, featuring Special Consensus, and Original, the recent Grammy-nominated album by bluegrass giant Bobby Osborne. Their participation on this project was awarded IBMA's 2017 Recorded Event Of The Year Award for Osbornes version of "I've Gotta Get a Message to You."

Ickes was a founding member and played with the critically acclaimed bluegrass group Blue Highway for 21 years. His fluid, lyrical, yet stinging style has graced the recordings and concerts of artists such as Earl Scruggs, Merle Haggard, Alison Krauss, The Cox Family, Tony Rice, Vince Gill, Alan Jackson, Toby Keith, and Reba McEntire.

Hensley started his performance career at a young age, joining Marty Stuart and Earl Scruggs on stage at the Grand Ole Opry when he was just 11 years old. He has since played or opened for Johnny Cash, Charlie Daniels, Steve Wariner, and Peter Frampton, among many others.

Tickets are $25 for adults, and $15 for children 12 and younger. Seating is limited.

Since 2013, the Blue Ridge Parkway Foundation has supported musical programming at the Blue Ridge Music Center as part of our mission to preserve the cultural heritage of the mountains. Learn more