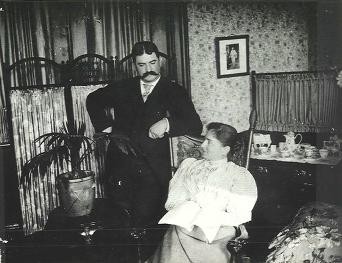 While the art collection of Dr. Claribel and Etta Cone is cherished by art historians and museum-goers alike, it would not have been possible without the financial support of their brothers’ thriving textile business in North Carolina. Modern Visions, Mountain Views: The Cones of Flat Top Manor connects the story of the Cone family to the Blowing Rock estate built by Claribel and Etta’s eldest brother, North Carolina’s “Denim King,” Moses H. Cone and his wife, Bertha Lindau Cone.

This exhibition explores the marvel of Moses and Bertha Cone’s visionary enterprise. Completed in 1901, Flat Top Manor was the centerpiece of a grand country estate, with 25 miles of carriage roads and an orchard of more than 30,000 apple trees. The house was outfitted with the most up-to-date technology of its time. Flat Top Manor featured hot and cold running water, gas lights, telephones, and central heat—extravagances that stood in great contrast to most homes in the North Carolina mountains.

By featuring stories from family letters and memories, Modern Visions, Mountain Views offers a window in the personal and cultural interests of Cone family members. This exhibition especially features souvenirs that Moses and Bertha Cone displayed at Flat Top Manor, items purchased during their 1906 world tour with Claribel and Etta Cone.

This free exhibition is organized in partnership with the Blowing Rock Art and History Museum and National Park Service.

Double your impact on the Blue Ridge Parkway!

Our hearts are bursting as we announce another gift-matching opportunity for the Blue Ridge Parkway. Yes. That’s right. WE HAVE TWO MATCHES!

Renovations to begin at The Bluffs Restaurant

Meet our new board officers, trustees and advisors

Born in Chattanooga, Tennessee, and based in Johnson City, Amythyst Kiah has a commanding stage presence, matched by her raw and powerful vocals. Playing banjo and guitar, her eclectic range of influences spans decades, finding inspiration in old-time, alternative rock, folk, country, and blues.
Jun

Led by vocalist Melody Walker, Front Country is a band on the precipice of a metamorphosis. As multi-instrumentalists, songwriters, and composers, the group’s musical vision comes through no matter what stage they take.
Jun

Playing music that ranges from blues to reggae, Leroy Jodie Pierson has been one of the St. Louis blues scene’s most active and productive participants.
See All Events