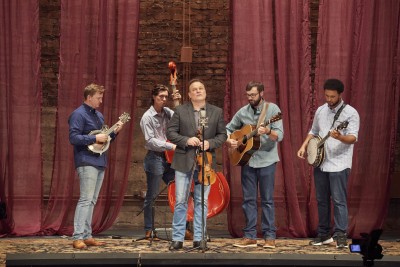 With his effortless vocals, distinctive songwriting, and instrumental prowess, Mike Mitchell continues to capture audiences and carve out his own place in bluegrass. His latest single, “Calling Me,” spent five months on the Bluegrass Standard Video chart, and his most recent album, Small Town, debuted at No. 2 on the Billboard bluegrass chart. “Mitchell’s command of the fiddle is obvious and his tone is righteous,” wrote Bluegrass Unlimited Magazine of his debut release, Dead Center.

Opening group: None of the Above has played music in the triad area of North Carolina for more than 20 years. Working with traditional bluegrass instrumentation, the group creates a unique sound that includes elements from a variety of styles including Americana and alternative country woven into their original material. The band includes Tim Sands on guitar, Tim Harrison on bass, Jon Cornatzer on banjo, Jason Bodenheimer on mandolin, and Lee Cecil on dobro.

Tickets are $20 adults, children 12 and younger are admitted free.