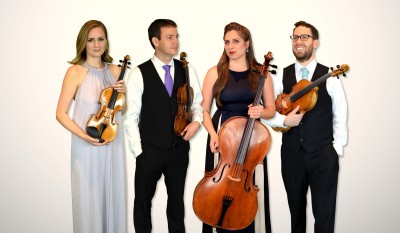 Born and raised in Europe, brothers Jens and Uwe Kruger started singing and playing instruments at a very young age. The brothers were performing regularly by the time they were 11 and 12 years old. In 1995, they became a trio with the addition of bass player Joel Landsberg, a native of New York City. Today, trio is based out of Wilkesboro, N.C., and is known for an incomparable sound, that blends bluegrass with elements of classical music.

In 2006, Jens began a venture into the themes and forms of classical music when he was commissioned to write the work, Music from the Spring, for banjo, guitar, bass, and full symphonic orchestra. Since then, he has received three commissions to write classical pieces which The Kruger Brothers have performed with orchestral ensembles. In 2013, he wrote Lucid Dreamer, a chamber music piece specifically for and commissioned by the Chicago-based ensemble Kontras Quartet.

Formed while the group’s members were string principals in the Civic Orchestra of Chicago, the Kontras Quartet went on to complete a four-year chamber music residency with the Western Piedmont Symphony in North Carolina. The Kontras Quartet records for MSR Classics and has released three critically acclaimed albums. The first, Origins, features new and lesser-known works from the members’ home countries, including the world premiere recording of Dan Visconti’s Ramshackle Songs. The second, Lucid Dreamer, treads the line between classical music and American folk and invigorates Kontras’ ongoing collaboration with the Kruger Brothers. In 2017, they continued this collaboration with the release of the Roan Mountain Suite.

Since 2013, the Blue Ridge Parkway Foundation has supported musical programming at the Blue Ridge Music Center to help preserve the cultural heritage of the mountains.