Joe Troop is a multi-instrumentalist and singer-songwriter from Winston-Salem, North Carolina. During his decade in Buenos Aires, Argentina, he formed the group Che Apalache with three of his students. The band’s second album, Rearrange My Heart, was produced by legendary genre-bender, banjoist Béla Fleck and received a GRAMMY nomination for Best Folk Album in 2020. Unfortunately, the pandemic has made international touring all but impossible, forcing Che Apalache into hiatus.

​​César Bacaró is a preeminent percussionist from the city of Santa Clara, Villa Clara, Cuba. As a young child he developed a deep passion for music and at age 7 enrolled in The Vocational School of Art (EVA) Olga Alonso in Santa Clara. In a career spanning 25 years he has played all over Latin America and Europe but now hangs his hat in New Orleans, where he plays with several bands and slaps his sazón cubano all over The Big Easy.

Trey Boudreaux grew up surrounded by Creole and Cajun music in Lafayette, LA. His parents also provided a constant flow of new sounds at home. Learning music both from his father and in school, Trey developed skills in a wide range of styles and quickly became an in-demand bassist, carving out his own special place in the New Orleans music community. He now lends his commanding and energetic groove to countless artists in and beyond South Louisiana. 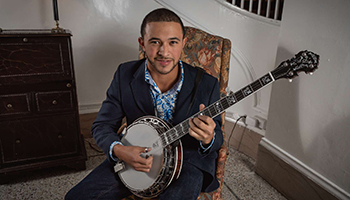 Opening: Trajan “Tray” Wellington’s love for music bloomed at an early age while he listened to his grandpa play diverse styles of music. From learning traditional bluegrass to studying diverse genres such as jazz, progressive bluegrass, blues, rock, and more, Wellington has gone on to play with some of the most accomplished musicians in the world.

Before reaching the age of 21, Wellington has received a number of awards and accolades, including two awards from IBMA — 2019 Momentum Instrumentalist of the Year and 2019 Momentum Band of the Year (with Cane Mill Road).

Adults $20, children 12 and younger are admitted for free