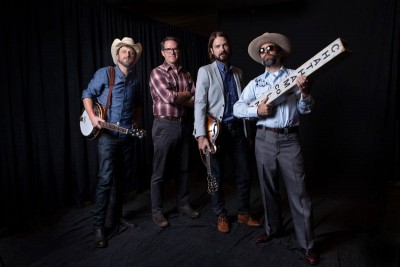 Chatham County Line has never been shy about crossing musical borders. The Raleigh-based quartet refers to its sound as new traditional. The band consists of Dave Wilson on guitar, vocals, and harp; John Teer on mandolin and fiddle; Chandler Holt on banjo; and Greg Readling on bass, pedal steel, and piano. Playing traditional string band instrumentation around a single microphone while clad in string bow ties and cowboy hats, the band visually projects a sepia-toned timelessness.

Raleigh-based Kate Rhudy, who describes her music as “sad river folk” with an uptempo grassroots drive, will open the show. Rhudy grew up playing classical violin and attending fiddlers conventions, but her album Rock N’ Roll Ain’t For Me finds her years later as a writer. She channels her remarkable talent through frank, plaintive lyrics and bittersweet reflections delivered with a gorgeous voice, conveying universal feelings of nostalgia, love and human connection.

Since 2013, the Blue Ridge Parkway Foundation has supported musical programming at the Blue Ridge Music Center as part of our mission to preserve the cultural heritage of the mountains. Learn more

We are pleased to welcome George Ivey to our team this month as a Development Officer. In his new role, he will support community outreach and fundraising in the greater Asheville area.

A Big Thank You to Our Volunteers!

Volunteers are valued members of our Community of Stewards. By generously sharing their time and talents, they reflect a deep commitment to the Blue Ridge Parkway. We can’t thank them enough for choosing to work with the Foundation to make an impact.

With 369 miles of hiking trails, the Blue Ridge Parkway offers abundant treks for First Day Hikes to celebrate New Year’s Day in 2020. Whether you want to kick off a new fitness goal or just enjoy the peace of the outdoors, the Parkway has you covered.
Visit the Blog

Mark your calendar for the fifth annual Denim Ball on Friday, August 7, to support Moses H. Cone Memorial Park. Check back here for details and updates.
See All Events