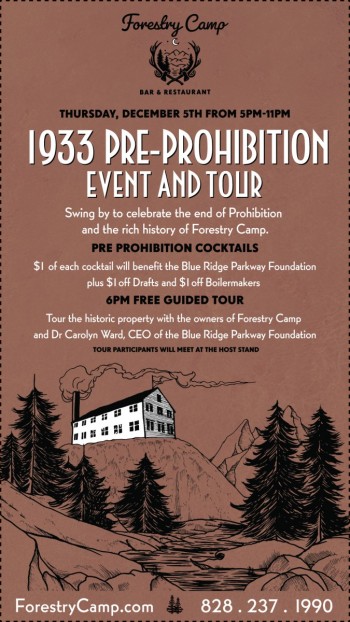 Join us at Forestry Camp Bar and Restaurant in Asheville to celebrate the end of Prohibition and the rich history of the building that is the camp’s home.

With every purchase of a Pre-Prohibition cocktails, $1 will go to benefit the Blue Ridge Parkway Foundation. There will also be $1 off drafts and $1 off boilermakers.

At 6 p.m., meet at the host stand for a tour of the property with owners of Forestry Camp and Carolyn Ward, CEO of the Blue Ridge Parkway Foundation, to learn how the camp and Blue Ridge Parkway’s history overlap.

The Civilian Conservation Corps was formed by President Franklin D. Roosevelt in 1933 as an effort to overcome the Great Depression. The historical property that is home to Forestry Camp was built by the government in 1937 as a home base for men prior to being assigned to CCC camps in the area. This property and the CCC were a vital part of the building of the Blue Ridge Parkway and national parks in Western North Carolina.