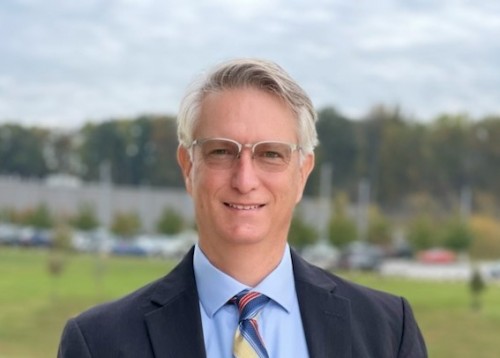 The Blue Ridge Parkway holds special importance to Ken McFadyen’s understanding of where he lives and what he does. He has been fortunate to serve in Blue Ridge Parkway gateway communities in North Carolina and Virginia throughout his professional career in local government administration and economic development. Currently, he serves as director of economic development for Botetourt County.

As a teenager with his Scout troop, the Parkway is where he learned to rock climb and rappel at Devil’s Courthouse. During Ken’s college years at Appalachian State University, he usually spent his free time hiking at Rough Ridge, Julian Price Memorial Park, and Moses H. Cone Memorial Park. At Doughton Park, Ken proposed to his wife, Melanie.  Today, he and his family frequently visit the Peaks of Otter.

Ken earned an undergraduate degree in history and a master’s degree in public administration from Appalachian State University, where he also taught as an adjunct instructor in political science. And, as an avocation, he earned a master’s degree in American history from Emory & Henry College. An Eagle Scout, Ken currently serves as an assistant scoutmaster and Wood Badge (adult leader training) troop guide.

Ken and his wife, Melanie, have two children, Sara and Conor, and they live in Fincastle within sight of the Parkway and Apple Orchard Mountain.