Steward Story: Growing up on the Blue Ridge Parkway 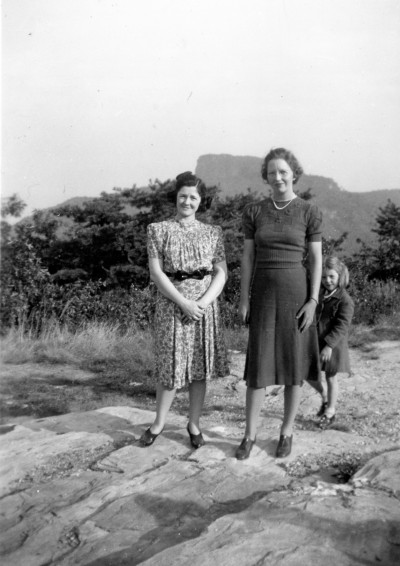 The Blue Ridge Parkway leaves each of us with special memories and a deep connection to the mountains. For Doris Luening, that bond was made when she and her family lived near Mount Mitchell as her father and uncle helped build the Blue Ridge Parkway in the 1930s. Here is her story:

Doris Luening was only five years old when she spent a year on the Blue Ridge Parkway, but even today she can direct you straight to the site of the camp that she and her family called home while her father and uncle helped construct the new roadway.

Just north of the entrance to Mount Mitchell State Park, a gate spans the faded road that leads to the spot where a collection of cabins and a bunkhouse once stood. The lodgings were built for the crews who took on the hard work of clearing trees, blasting rock, and moving earth to give shape to what locals called “The Scenic.” Doris’s father, James Erwin Asbury, and uncle, Nesbitte Samuel Asbury, came to the monumental project with Nello Teer Construction Company, which was awarded the first Blue Ridge Parkway construction contract.

James and “Uncle Neb,” as the family called him, were shovel operators, running the complex machines on precarious hillsides to dig out rock and dirt, making way for the paving to come. “In 1935, if you had a job, you were a lucky dog. A lot of people didn’t,” Doris explains. “It was the depths of the Great Depression when this Parkway started. It was a wonderful gift to many people for creating jobs.” 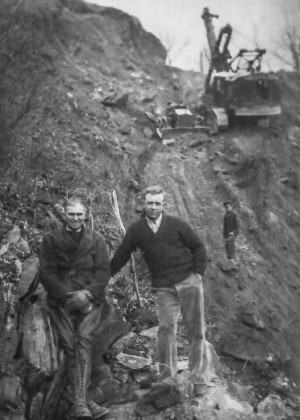 While the Parkway provided steady work for her dad and uncle from 1935 to 1940, it gave Doris a gift of exploration and adventure. There were plenty of young families on the mountain to form a tight-knit community. “You think of being atop Mount Mitchell as a lonely wild place, and you’re being a wild child,” says Doris, “but there were people to play with there and we did.”

She, her parents, and younger sister lived in a three-room cabin heated by a pot belly stove. Her uncle and aunt were just a few cabins away. Doris and her sister named the resident wild turkey “Tom,” and called him their pet, laying out bread crumbs on a stump so they could watch him eat. The kids rode bikes and played with blocks on the floors of each other’s cabins. Doris had special instructions to watch out for snakes to keep her sister safe. When family and friends came to visit their remote outpost, they hiked to the tower atop Mount Mitchell. Doris even remembers visiting the worksite and riding in a dump truck with one of the workers as he released earth over a steep drop off. “It was scary and thrilling,” she says.

The excitement and charm of those times have never left her memory, and in 2014, Doris and her husband, David, established the James Erwin Asbury and Nesbitte Samuel Asbury Endowment to give back to the place that has played an important role in her family’s history.

“My dad and uncle worked on the Parkway for five years, and it was a wonderful time period,” Doris says. “They loved the value of being outside on the Parkway and working, and what it did for the surrounding areas and the people. That’s why we created the endowment. We’d like our family to remember them, and remember that they helped create this park, because it’s a gift to all of us.”

Giving back to the Parkway is a meaningful way to celebrate your personal connection to the journey. In 2014, Doris and David Luening created an endowment to honor her father and uncle. To learn more about how you can leave a legacy, contact Ashley Edwards at (866) 308-2773, ext. 170, or via e-mail.

Tell us your Parkway Story

FUNDED! Thanks so much for your gifts to make this project possible. Please join us for a ribbon cutting to celebrate the completion of the project at 10 a.m., October 24, at Price Campground, Loop D. Price Park Campground is one of the most visited camping areas on the Blue Ridge Parkway, with 129 tent and 68 RV sites. Your support will build a modern facility with showers and handicap-accessible restrooms.
Learn more

Kids in Parks is a network of hiking, biking, paddling and disc golf trails outfitted with free activity guides for children and families. The mission behind these TRACK Trails goes beyond fun; the goals are to encourage kids to be physically active and help them build meaningful connections with nature. In turn, these goals help inspire the next generation of stewards, who will care for all public lands, including the Blue Ridge Parkway. Parks are at their best when people use, appreciate, and care for them.
Learn more

You can give to address crucial repairs and maintenance at Flat Top Manor as well as trail work and landscape restoration for this treasure listed on the National Register of Historic Places.
Learn more

Our goal is within reach! Our updated goal is $60,000 to hit our fundraising target for reopening the former Bluffs Coffee Shop building at Doughton Park, near Sparta, N.C. We've come so far thanks to your dedication and generosity for the project.
Learn more

Since the Foundation’s initial funding of remote wildlife cameras in 2009, the devices have captured more than 25,000 images of over 35 species of wildlife, including black bears, bobcats, coyotes, red and gray foxes, elk, European wild hogs, white-tail deer, and numerous other species on the Blue Ridge Parkway. The infrared cameras are a valuable tool for resource managers in their efforts to survey and oversee larger animals, especially predator species, on Parkway land.
Learn more

Habitat Research Bog turtles are elusive creatures, difficult to find in summer and hidden in hibernation during the winter. As the smallest and most rare turtles in the United States, the largest bog turtle ever found measured only 4.5 inches. They are listed as "Threatened" by the Endangered Species Coalition.
Learn more

Many a traveler appreciated the ability to stop for a sip of cool clean water from iconic rock water fountains that once dotted the Blue Ridge Parkway. In addition to serving visitors, the fountains helped define the park’s rustic design aesthetic, along with split rail fences, rock bridges, and more. Today, the few fountains that remain are inoperable.
Learn more

MATCHING GIFT OPPORTUNITY! In 2016, the National Park Service is celebrating its Centennial. In preparation for the anniversary, Congress designated $10 million toward a competitive bidding process called the Centennial Challenge to make improvements in National Parks across the country.
Learn more

Rangers are tasked with not just the safety of visitors on the Blue Ridge Parkway, but also the resources that make the park so special, including the plants and animals that live here. The Foundation will fund training for park rangers to reduce poaching and natural resource theft.
Learn more

Elk and wild boar populations are growing along the Western North Carolina section of the Parkway. The Foundation will fund research to aid in good wildlife management decisions for these large mammals.
Learn more

MATCHING GIFT OPPORTUNITY! This project will complete the repaving of the one-mile loop around the lake. Youth conservation crews will help clear vegetation in preparation for the paving project. The bridge nearest the Peaks of Otter Lodge will be converted from an arched to flat span. This spot, which welcomes more than 200,000 visitors each year, will be the first complete ADA trail along the Parkway in Virginia.
Learn more

FUNDED! Last year, the Foundation supported the expansion of the Upper Falls Overlook to allow visitors access to an exceptional exposure of the Linville Falls thrust fault, the starting point of Linville Gorge. Signs highlighting the significance of this geologic feature will complete the project this year. We've reached our goal for this project. Thank you for your support!
Learn more

We are partnering with the Conservation Trust for North Carolina (CTNC) to support a crew with the group's North Carolina Youth Conservation Corps, allowing Parkway campgrounds and trails to realize improvements while young men and women learn about the wilderness and themselves.
Learn more

The assistance of park rangers in times of emergency is invaluable. This investment in EMS training for staff and up-to-date emergency equipment makes exploring the Parkway a safer experience for all visitors.
Learn more

Doughton Park is a beloved spot on the Blue Ridge Parkway, but it is difficult to enjoy the picnic area here in its current run-down condition. The picnic tables and walkways date back to the 1940s and ’50s and are in severe disrepair. We will fund a rehabilitation of the area to replace tables and address crumbling stonework, flagstone walks, and fire pits.
Learn more

FUNDED! There's a new bridge on Grassy Gap Trail. In the past, the crossing over Basin Creek was often difficult, with only a long, precarious log spanning the waterway for hikers. Thanks to generous donations to the Blue Ridge Parkway Foundation by members of the Piedmont Hiking and Outing Club, a 30-foot bridge now makes the trek safer and more accessible for everyone.
Learn more

Crayfish may be small, but they can send a big message, telling scientists a lot about the state of the environment in which they live. The southeastern Appalachian Mountains are one of two major crayfish hot spots in the world, yet little research has been done to catalog or understand the varieties of species along the Parkway.
Learn more

FUNDED! Those who hike the section of the Mountains to Sea Trail near Blowing Rock have likely encountered the dangerous and seasonally impassible crossing at Boone Fork Creek. To remedy the problem, the Friends of the North Carolina Mountains to Sea Trail secured a grant of $200,000 to build a pedestrian bridge. The Foundation will provide a match of $50,000 for construction and engineering costs to make this trail linked to the Blue Ridge Parkway a safe and enjoyable hike. Construction will begin on this project in early 2016.
Learn more