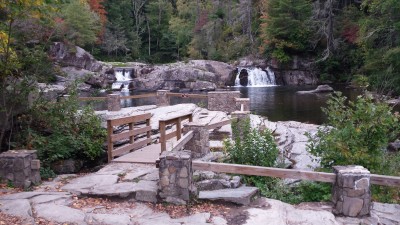 (LINVILLE FALLS, Blue Ridge Parkway) – The new interpretive signs are installed, and it’s time to celebrate the completion of the expansion project at Upper Falls Overlook at Linville Falls with a ribbon cutting at 11 a.m., Friday, October 16.

Geologists and students have long studied the rare rock exposure, but the untrained eye wouldn’t recognize the characteristics of the rock that tie this spot to the creation of the Appalachian Mountains. Here, visitors can see where two rock formations collided, thrusting a one billion year old layer of rock called Cranberry gneiss up and over a 500 million year old layer of Chilhowee quartzite. The Linville Falls Thrust Fault is rare because most traces of these monumental shifts in the Earth’s crust are buried deep underground.

“This is an opportunity to see rocks that tell a lot of the history of Appalachian Mountain building in one place,” explains Lauren H. Waterworth, environmental lawyer and geology lecturer at Appalachian State University.

With the addition of the new signs and expansion of the overlook, it is now a place for scientists, as well as casual Parkway visitors, to learn about these ancient peaks. “It is a little treasure in the mountains,” says Alex Glover, geology instructor at Mayland Community College and past president of the Carolina Geological Society. “I’d say it is one of the top places to see on the Blue Ridge Parkway.”

At the event, Glover will share insights about the geological history of the Thrust Fault and the mountains. The public is invited to attend. Guests are encouraged to meet at 11 a.m. at the visitor center, milepost 316.4, for a short hike to the overlook.