Our CEO wins award for championing natural and cultural heritage 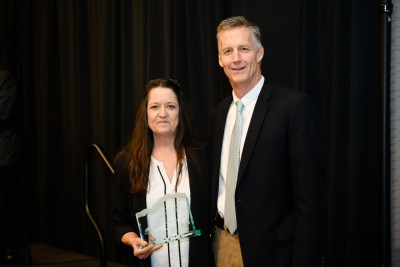 CEO Carolyn Ward was presented the William C. Everhart Award by Dr. Bob Powell, Director of the Institute for Parks at Clemson.
November 7, 2019

We are so thrilled to announce that the Foundation’s CEO, Dr. Carolyn Ward, was recently honored with the William C. Everhart Award by the Clemson University Institute for Parks in recognition of sustained achievements that provide creative insights and that foster an appreciation of our natural and cultural heritage.

The institute presents the annual awards program, which is named for George B. Hartzog Jr., the seventh director of the National Park Service, to showcase leading figures in the field of conservation. The awards are named for visionary leaders who make significant contributions to the management of parks and preservation of our natural, historical, and cultural heritage.

Ward received the William C. Everhart Award because of her longstanding commitment to connecting people to our country’s natural and cultural places and resources, and her contributions to the field of interpretation.

Bob Powell, director of the Institute for Parks, presented the award to Dr. Ward at a ceremony on October 22. According to Dr. Powell, Ward’s passionate leadership in the interpretation field has been instrumental in ensuring the field is evidence-based and moving forward.

“For many years, the philosophies and principles underlying the profession of interpretation have largely been followed based on faith and were largely untested,” he says. “She is a longstanding champion for the importance of research in informing the interpretation field as it evolves to meet the needs of the 21st century public.”

Ward’s distinguished career has spanned three decades, from field interpreter at Hungry Mother State Park to CEO of the Blue Ridge Parkway Foundation, the primary philanthropic partner to the Blue Ridge Parkway. With more visitors than Yellowstone, Yosemite, and the Grand Canyon combined, the Blue Ridge Parkway is one of the most visited units of the National Park Service. Under Ward’s leadership, the foundation has provided more than $14 million to support programs and projects that continue to help preserve and protect the parkway.

Ward was born in the Blue Ridge Mountains in Southwestern Virginia, graduated from Emory and Henry College, and received her master’s degree and PhD from Virginia Tech in Forestry. She is a decorated professor and award-winning researcher and author whose life’s work has been dedicated to building bridges and making connections. While working at Humboldt State University, Ward grew a modern and comprehensive interpretive program and conducted field research across the country. In 2009, she launched the Kids in Parks program in partnership with the Blue Ridge Parkway and Blue Ridge Parkway Foundation, which unites National Park Service, state parks, community groups, the Eastern Band of Cherokee, and nonprofit organizations around the goal of getting more kids moving outdoors and connected to public lands. The Kids in Parks program now features 200 trails in 12 states and has facilitated more than one million adventures for kids and families.

“Dr. Ward’s sustained leadership, grit and determination has left a lasting legacy across the US and the World and has positively influenced countless agencies, managers, interpreters, as well as the general public,” continues Dr. Powell. “Carolyn is an important and powerful role model that has blazed a trail of success in a field that has been traditionally male dominated. I cannot think of a more deserving recipient for this award.”