Muddy Creek selected as new operator for The Bluffs Restaurant 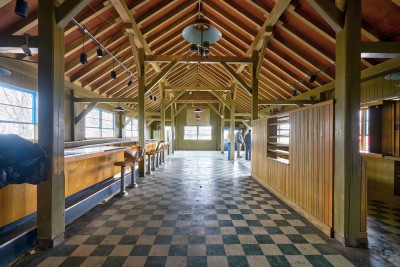 Construction is underway at The Bluffs Restaurant at Doughton Park. Photo by David Huff.
March 11, 2020

We are pleased to announce that renovations to the interior of The Bluffs Restaurant at milepost 241 on the Parkway are underway, and a new operator has been selected.

Muddy Creek Enterprises, owners of the Muddy Creek Café & Music Halls in Sparta and Winston-Salem, will operate The Bluffs Restaurant under an agreement with the Blue Ridge Parkway Foundation. The restaurant is slated to reopen this summer.

“The Bluffs project has truly been a community effort, so we’re thrilled that Muddy Creek, a local business, is a partner in this long-awaited revitalization,” said Carolyn Ward, CEO of the Blue Ridge Parkway Foundation.

“On behalf of the National Park Service, we are so pleased to see this beloved area of the park come back to life,” said Blue Ridge Parkway Superintendent J.D. Lee. “The Bluffs at Doughton Park was one of the earliest developed areas on the Parkway. This site is integral to the park’s history and will again be part of its future thanks to the support and involvement of so many.”

The Bluffs opened in 1949 and was the first of what would be only four restaurants ever opened on the Parkway. The former coffee shop closed in 2010.

“The reopening of The Bluffs provides an opportunity to bring back a place that has meant so much to so many people,” said Bill Heath, Director of Operations for Muddy Creek Enterprises. “To be a part of that experience is something to be cherished and appreciated.”

In recent years, the building has undergone initial renovations including replacement of the roof and remediation of mold that developed while the structure was unoccupied.

During its 61 years in business, the interior of the facility remained largely unchanged. For the rehab project, new interior fixtures and design upgrades were selected to replicate the original look and feel of the restaurant. The interior design will follow the guidelines of the National Park Service (NPS) and N.C. Historic Preservation Office.

The renovations also include the installation of new kitchen equipment, HVAC, plumbing, and electrical to meet current safety standards. Atriax Group of Hickory, N.C., is overseeing the design and construction.

While work is underway, the NPS asks for the public’s cooperation by staying behind safety fencing, only using open and designated sidewalks, and not distracting the workers.

A combination of donations from individuals and community foundations and support from the N.C. General Assembly and Appalachian Regional Commission are making the project possible through the Blue Ridge Parkway Foundation.

The Foundation will hold a historic lease for the National Park Service facility. The NPS has authority to lease historic buildings and other structures through public-private partnerships to help preserve and maintain the NPS's historic assets for future generations to use and enjoy.