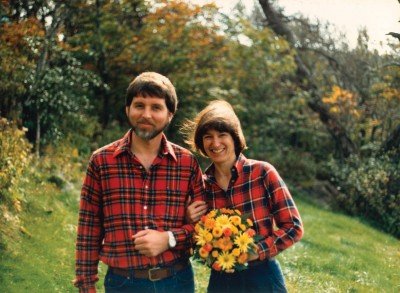 Ray and Laura Pease on their wedding day in 1986 at Craggy Gardens on the Blue Ridge Parkway.
November 26, 2019

Ray and Laura Pease shared a love story, and not just with each other. The Blue Ridge Parkway wove its way into their hearts, and became a touchstone in their life together.

After discovering the Pisgah Inn during a visit to the Blue Ridge Mountains in 1979, the couple returned each October to explore the Parkway. “Every year we would come and discover new trails and take some of the old trails,” Laura says. They weren’t shy about asking for recommendations for their next hiking or picnic spot. “Being Southerners, we talked to everybody.”

When the couple decided to get married in 1986, Ray knew he didn’t want a big to-do. Instead, they planned a simple ceremony with a justice of the peace and Ray’s brother and sister-in-law as witnesses. Clad in plaid flannel shirts, Laura and Ray took their vows amid the autumn colors at Craggy Gardens, just beyond the Visitor Center.

In 2010, they said goodbye to Louisiana and made the mountains their forever home. And because of all the people they had met during their Parkway visits, they had a trove of friends ready to welcome them.

As they grew older, the two replaced some hikes with weekly drives. “We would turn the radio off.
We didn’t want to hear the news, or even music,” Laura recalls. “Riding along the Parkway, there is just so much to absorb.” On their car, a Blue Ridge Parkway license plate read “DCT,” for Dreams Come True.

After Ray passed away in June of this year, an outpouring of gifts came in to the Foundation in recognition of his love for the Parkway. And Laura honored one of his last wishes. Before resting his ashes at their church, she traveled with them to Mount Mitchell, with a stop at Craggy Gardens, so they could have one more Parkway journey together.

“I realized later, he did that to make sure I would go back without him,” Laura explains. “The Parkway became part of us, and it gives me great comfort now.”

If you would like to make a gift in honor or memory of a love one, click here. We will send a card announcing your donation.